I Listened To A Multigenerational Conversation About The Kindertransport And Forgiveness 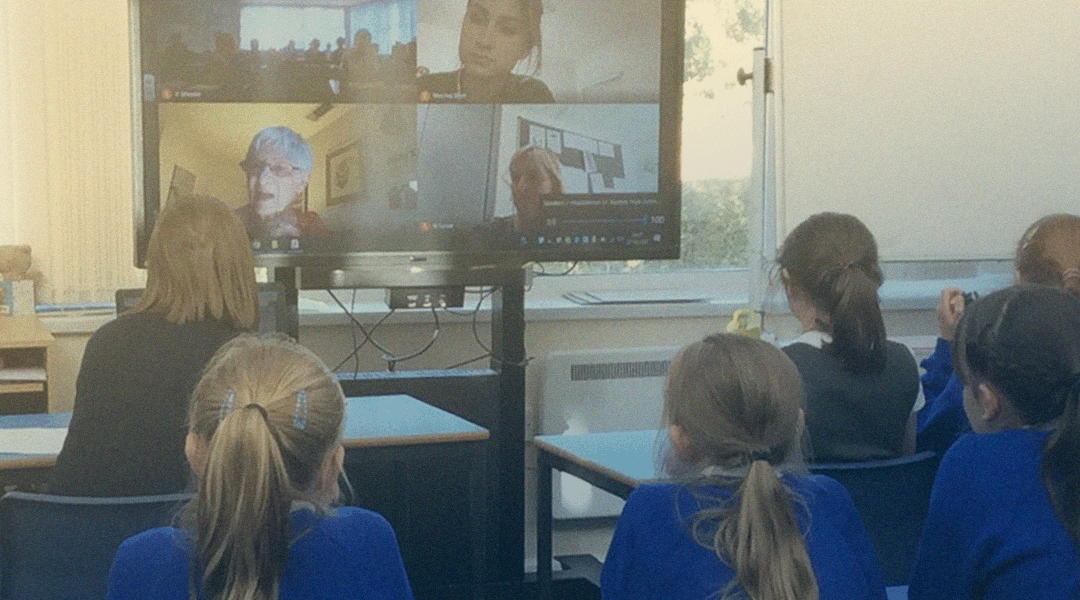 Since March, the hustle and bustle of our former lives has been strangely imposed upon by the confines of our homes.  This imposition has introduced us to unique challenges.  Daily virtual communication and other uncomfortable attempts to “stay connected” often feel indigestible to our souls at times.  In the midst, I wonder with doubtful curiosity, “How will this resolve, and what is the Lord’s purpose in this?”  I know that God has brought forth good fruit from unpromising situations countless times before.  But sometimes an encouraging glimpse into one of His hidden works now, helps me trust Him once again: that He will bring together all things, just as He has always been faithful to do.

A few weeks ago, I had the privilege of observing one such “hidden work” of God.  This occurrence happened on a quiet morning at 6:30 over a Google Meet launched from Arizona. Helen Caulfield, one of the sixth-grade teachers at Ladymount in Wirral, Merseyside, NW England heard about Hanna Miley through a network of connections. She asked if we could set up an occasion for students to listen to Hanna’s story and ask her questions. The children have been studying the Kindertransport, which enabled 10,000 children, mostly Jewish, to escape Hitler’s evil reign in Germany. At the end of their school day, and at the beginning of ours, the Kindertransport became the subject of a multigenerational forum. I listened in amazement at the candid exchanges taking place between the Year 6 schoolchildren at Ladymount, and our beloved 88-year-old Hanna.

“How old were you when you got glasses, Hanna?”  Youthful British accented voices asked questions such as this, and many deeper questions regarding the experiences of a Jewish WWII holocaust survivor.

I realized, a conversation such as this could only have happened from technological developments and increased attempts at communication during the COVID-19 era.

Not only did this interview cross the boundaries of space and time in our current world, but it called forth a profound empathy from children of today for those who have suffered in the past.  With compassion written on their faces, the children’s hearts ached for Hanna’s parents. They knew then what Hanna’s parents could not have known at that time:  Hanna’s mother and father would never see their beloved daughter again in this life.

Hanna shared a portion of her life with the children, the grievous heaviness and disturbing loneliness that she carried throughout her childhood.  She felt the burden of anger, and the sense of betrayal towards Germany after news arrived that her parents had been killed.  However, not only did she bridge the gap between the experiences of generations, but she also took another step in healing the past by sharing the truth about her experience.

Through my iPad, I saw the perplexed, sweet faces of the children in response to Hanna’s confession. Their young hearts were not just softened towards Hanna, they were transfixed and inspired when they heard Hanna share how she overcame such grief and loss. This is the next step in reconciliation:  transforming the present.  By sharing the source of her courage and freedom to forgive—the reconciling work of Jesus—Hanna revealed to the children that the future can be changed if our hearts are changed.  She told them that “forgiveness is the key to unlocking any kind of good life.” At this, a wave of peace visibly passed through the crowd of young faces on my screen.

“Forgiveness is the key to unlocking any kind of good life.”

Later Helen emailed Hanna that the children “are particularly amazed at what you said about forgiveness, and we talked about how we can learn from your message.” Their teachable spirits reveal the right type of soil in which the seeds of reconciliation may be planted.  And Hanna’s willingness to make the effort of speaking the truth to a future generation is a significant piece in guiding the future into healing and peace.

This Google conversation moved far beyond a meaningful school history lesson.  It was a reminder that even the recollection of evil and suffering from the past has the potential of revealing and even bringing to completion God’s good purposes for each and every human life.  Sharing such recollections for the purpose of reconciliation not only transforms relationships of the present, but offers the promise that forgiveness unlocks a future of healing and peace.

P.S. Question: When did Hanna get glasses? Answer: 40 years ago!